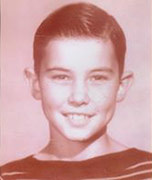 Me at age eight or nine

A Wish Dash of Dignity

Gentle Readers,
I fear last post may have left you with an unpleasantness from hearing the stories from my family. Especially one of them (to quote Gandalf, “Name it not!”) So I have this time decided to balance that out a bit with some amusing sometimes sweet family anecdotes.

But first, I am not sure how much more I will write about my beloved Aunt Edel, who starred in a recent post, and so I want to start off with an anecdote I forgot to tell of in my recent mention of her. To refresh this for new readers, recently I talked about having been rescued every summer for a week or two (rescued, for instance, from the “orphanage”) to hang with her and her husband, in their old Hollywood mansion (which later Aldous Huxley died in)

Her husband, a colorful native of Estonia, who had escaped from impressment (read cannon fodder) into the Czar’s army during World War One, and who stowed away on a steamer to San Francisco where he learned the tailor trade, ended up making suits in Beverly Hills, for the movie stars, as well as his Nobel Prize winner friend William Faulkner, then a Hollywood screenwriter, about whom he would tell us amusing stories. But I digress. To the meat of the anecdote:

I remember once when Aunt Edel said to me, “I don’t understand about you, Eric. People tell me you are unruly and resistant, and yet here with us you are so sweet and well behaved.”

I am not sure I had my wits about me then cause-and-effect-wise, but what I should have told her was the mere thought of displeasing her and possibly causing thereby a withdrawal of my annual invitation, was a horror I did not care to flirt with happening.

So, on to amusing family anecdotes!

And so to segue, here’s one about Jim and Mike together. (Mike as usual representing the practical common sense side of discipline, Jim the dreamy poet musical type, not so much)

When Mike was six and Jim was five Grandma Dorothy said she had given them both a chance to learn about earning money, by raking leaves and putting them in boxes. She was to pay a nickel for each box they collected. Well, Mike set to in his industrious way, but Jim just sauntered about, whistling.

Finally when all the leaves were gone into boxes and it was time for payment, it turned out that Mike had done it all (and Jim not more than none). Grandma Dorothy was distressed telling Jim she felt bad that she could only give money to Mike, since Jim had done diddly squat. And Jim just smiled, she said, and put his arm around her waist (as far as he could reach) saying “Gamdorfy you don’t have to worry about things like that!”

I can’t resist one more Grandma Dorothy Jim story. She said when she had explained to a young Jim about the facts of life, he exclaimed, “How long has this been going on?”

And if you want a story about a young me (still in a high chair!) I refer you to the incident my father liked to tell. It is the story I covered in the poem at the top of this post.

I have no suitable amusing thing from Robin, perhaps because it would ring hollow here since he lived in tragedy all his short life (at least post age four) but I would feel bad leaving out about Robin, the one that killed himself. He just (I think)*did it because he had no friends, was socially inept, dressed like a scarecrow** and yet had a stubborn belligerent attitude. I and my older brothers should have been more careful with him, since because of his emergency tracheotomy at age four, he was not the sharpest knife in the drawer, He would say such stupid things, and we always seemed to think we could shame him out of them, with scathing words of how stupid what he said was. We decided he needed shock therapy. Which I think was his undoing, God help me and my older brothers. In a way I can’t seem to shake I feel responsibility for his death. I guess we should have humored him, but we ironically decided we had too much respect for him, too much hope he could pull out of it.

And here’s another bit from Grandma Dorothy:
She who often drank (but who believed in reincarnation) used to regularly tell us all (garrulous after a few shots of her cheap pale dry sherry) “Next time I’m gonna be a man!”

There. That should hold you.

But I want to acknowledge that I originally started this blog as a vehicle for Sufi-themed stuff. At least indirectly, with perhaps examples from life. My life in this case, mainly, because that’s the life whose inner working I have access to, which also is a Sufi thing, in which like Socrates had said, “Know thyself!” and in that analysis, I do go back to my roots (aka my biography).

And this of course has led to the inclusion here of biographical material. Hence my recent biographical posts. But my old friend Ralph has often said I have led an interesting life. And I do promise that even if I blend my life into this Sufi-themed discourse, I do hope to include only the interesting parts.

And it does seem to be going over. Since I have been emphasizing stories from my life, the followers have been increasing much more rapidly than usual.

*I say I think he killed himself because he got no respect for his intellect (remember, he had choked on peanut butter at age four and no doubt thereby lost many brain cells waiting for his emergency tracheotomy) from his brothers, and he seemed to have no friends. Tragically, I cannot know for sure. You see just before he killed himself, he and I had quarreled. Maybe it was when he denied that the Indian Mystic Meher Baba (whom I followed) was the reincarnation of Krishna, as he had claimed. Which is a defensible view no doubt but Robin (who had joined the fundamentalist sect claiming to adore Krishna (aka “Krishna Consciousness) said he had seen the picture of Krishna in the temple and he had six arms and his skin was blue, something that could hardly be said of Meher Baba. So there!

And tragically, when Robin had come to see me just before he killed himself (He was seen undressing on the beach in San Francisco, leaving his clothes and driver’s license there. And witnesses says he swam out to the horizon and when hours later his body was washed ashore and linked to his ID, I received a weird phone call in the middle of the night, from the apparently weird coroner asking me to come and identify the body, which I did, next day. Horrible.) I was on the toilet and when done there I was curious as to the doorbell, and saw out the window that it was Robin departing. I wish I had called to him but we had just fought and it was unpleasant and so, not knowing Robin was in danger, I just let him go. And that was just the first of several futile attempts to find solace in family. I later learned he had called my mother and her stepson answered and to play a prank said she wasn’t at home. I forget the details but I remember that in retrospect he had tried for someone anyone to buck him up and stop him from his suicide plan.

He had committed himself just before to a psychological crisis clinic but as he had done it himself, he was also free to sign out, which he did just before his attempts at family contacts.

**Okay so now this does remind me of an amusing Robin story. Though tinged with the sadness of Robin seizing finally on something he could do better than his brothers.

You must know that we four brothers were a competitive bunch, always inventing ways to compete. Once we decided to see who could hold his arms extended like a scarecrow the longest. Try it and you will see it’s not that easy. After a while your arms ache and which happened and so we said to the keeping-going Robin, “Yep you win!”

But that wasn’t enough for Robin who wanted to humiliate us further and so he kept his arms up. Every so often we would look out the window and there was Robin, still doing his long-lasting scarecrow imitation. But when he finally figured he’d rubbed our noses in his victory enough, and decided to lower his arms, they wouldn’t stay down. They would keep flying up as if they indeed wanted to be his airplane wings. So even when he won, the poor guy ended up a laughing stock.