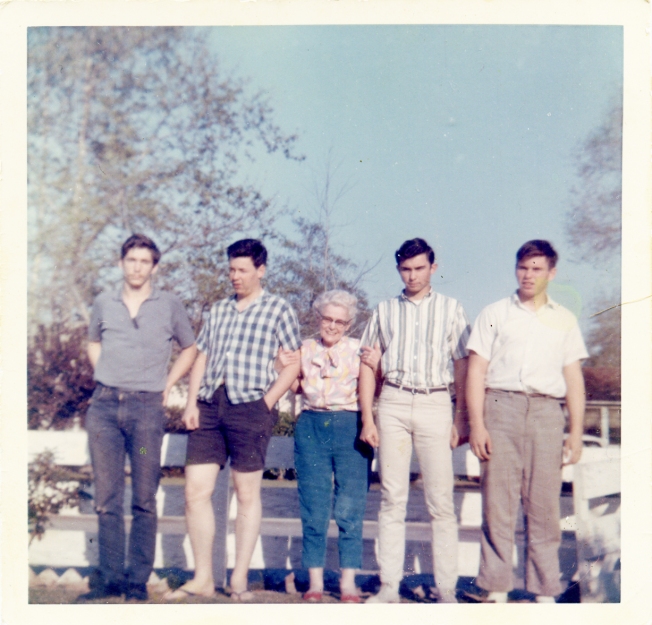 Great Aunts Can Can in Antique Parlors

There is always a beginning:
Some room to be furnished
Makes you want to stock it

When then I sat entranced and enthralled:
Was it my first meditation?
I got a nose for fire underneath

As only cultured great aunts can:
Can in antique parlors in which
One could never be alone

Gentle Readers,
I was planning to start–continuing with the Biographical trail I recently started on–with more stuff about my mother who when last seen was abandoning us boys AGAIN. I even posted such a promise on Facebook, including a suitable introductory poem. But it turns out that what’s most logically next up story-wise has popped up, so I will postpone that poem for later when I get back to my mother. It’s just I figured some expository stuff about my family should come first (which will help to explain the crap that came down family-wise).*

Alas, I have no photo of Aunt Edel, (Our child’s nickname for Edith) the great aunt of the poem above. Childless herself, she used to invite each of us boys for a summer visit in her classic antique Spanish style mansion with the two story high living room, giant Monterrey beams, and a six foot tall walk-in fireplace, just under the old (original) Hollywood sign, hard by the Hollywood reservoir. The house she sold to Aldous Huxley (where he died.)

So I have to make do with a photo of her sister, my Grandma Dorothy (see above) The photo is from my high school days, living with Grandma Dorothy and my three brothers, all shown here in our front yard, (circa 1964) in Sun Valley, California. (Los Angeles’ San Fernando Valley) I am the one just to Grandma Dorothy’s left. The rest, your left to right, are:

Mike, the eldest, thought the smartest, til Jim beat him (by a nose) at the SAT’s.

Robin the youngest, who tragically choked on peanut butter at age four and had to have a tracheotomy to save his life but alas, probably not so much his original amount of brain cells.***

And what can I say about Mike? Personally, I think Mike had the hardest childhood. Sure we (I and Robin, the youngest) were put in an orphanage from five to ten years old (in my case). And Jim the next oldest had a bit of idyllic by comparison, living with a family charmed by him who wanted to adopt him. But appearances sure can be deceiving, since he later went insane and died young.

And so the oldest was Mike. Who had skipped a grade. Yep he was the smart one. But he had to get stuck with living with our grandfather (see below in re him).**** I should mention that there was no grandfather on my father’s side, that we had ever met. In fact we only met his mother once, when I was twelve, on a visit north to Sacramento where his family had a bakery, which we visited. But we were frustrated that for all the wonderful smell in the bakery they wouldn’t even give us a cookie, explaining that there were already too few for the customers. In fairness, we were assuaged when she gave us each a silver dollar. My basic point though is my father was the black sheep and so we never had anything to do with his side of the family.

Continuing with my biographical background:

In important ways the pathology of my family goes back to the turn of the century, in rural Michigan, where my Grandma Dorothy and her sister Edith (called Aunt Edel) lived with their country doctor father.

My mother was an only child. Her father had really wanted a son (He was a superman of a high school three sport athlete and wanted a son to show the manly ropes to) and his wife hated sex, which made problematic any prospects for more children, and so Grandpa Logan (affectionately referred to as Grambogie, which name he may have suggested himself for his resemblance to Humphrey Bogart) took it out on his fat and only daughter, sneering at how she “waddled.” He no doubt had felt cheated, having waited patiently for marriage with his incredibly beautiful wife only to discover that she hated sex. I imagine it was a surprise to her as well. I do remember her oft repeated refrain, as she got drunk at night, (we lived with her when I was in high school) that though she loved Logan for 39 years and missed him terribly, “Thank God I’ll never be bothered in bed by a man again!”

I do believe in a family domino theory and my family certainly showed that.

Okay you may say so what happened back then in the turn of the century rural Michigan?
And here is the grim tale (of the first domino to fall):

Grandma Dorothy’s father was a surgeon, but mostly a country doctor. He was a strict Calvinist sort of guy and when he came across his two daughters (aged three and six) exploring each other’s genitals, he reasoned thus:

If this is what they are doing at this tender age they will Grow up to be whores for sure!

And his remedy was pretty much the same as African genital mutilation. He performed clitorectomies on both of them.

Which was why Grandma Dorothy hated sex.

Grambogie felt cheated out of a hot wife, and took to drink and other women. There was a rumor I had a half uncle in New York city.

You may surmise the major influences in my life came at least a generation removed from the usual. And these two sisters, Dorothy and Edith*****, my mother’s mother and aunt, played an outsize role in my youth. Of course an odd thing about such relationships is by the time your youth is played out, these older ones have died. And for instance in the case of my beloved Aunt Edel, died thinking I didn’t love her. She didn’t understand about adolescent rebellion and that it certainly was not an index of love. But she died before I got my head on straight enough (as my old Sufi preceptor Lud used to call it) to explain such stuff to her.

*This reminds me of something I remember from my English History class: The professor was asked to succinctly summarize British history. His answer was: “Well, it was one damned thing after another.”

**Died age 39 from complications of schizophrenia

****And just to encapsulate the issue, I heard that Grambogie (all his life obsessed with proving his manhood) had held Mike’s hands under the hottest available tap water, so he could see what it amounted to “to be a man.” And after years of that, Mike had some sort of Stockholm Syndrome like when Grambogie would be yelling at us boys, (“How stupid can you get?”) and Mike, he would just obsequiously say, “Stand by!” And yes, I do give him credit for the wit of it. Indeed Mike was clever. For instance we were all punsters due to the malign influence of our father, but I am proud of Mike who came up with the world champion triple pun. Jim was telling us about when he was in France and wanted to get a traditional harvest time job of stamping up and down on the grapes to extract the juice, for wine use, etc. but alas! There was suddenly a machine that did the stamping, and all you had to do was open a spigot and the juice would flow out. And Mike said, “What kind of spigoted machine is this, trying to stamp out the juice?”

*****As you could extrapolate from these two sisters, in my family there were age difference gaps you could gallop a herd of wild horses through. I had on this account an unusual family constellation. Because my mother was an only child, and her father was an only child, and her mother had only the one sister, with no children, we had no cousins. Of course there were a few Cousin Winifreds, (third cousins three times removed, etc) And so, all family members were old. Fortunately, as a child I charmed old ladies. Later when at ten I heard that also in Pasadena (California) lived my 80 year old Cousin Winifred, I upped and visited her. Introduced myself, and by golly, I got cookies.

Another oddity about my childhood due to being surrounded by old people, was that visiting their houses, hearing them talk, it was like a masterpiece theater thing showing how people used to live in the 1920’s etc. They all still had their same old classic cars (belike rotting in the garage), and style of lamps and old radios you see in the Thin Man movies. My great grandmother, whom I despised (but that’s another story) wore a whalebone corset. And hearing a (nightly) drunken Grandma Dorothy sing “Ain’t We Got Fun?” (a depression era hit saying that fun was more important than poverty) I was thus immersed in a bygone era.