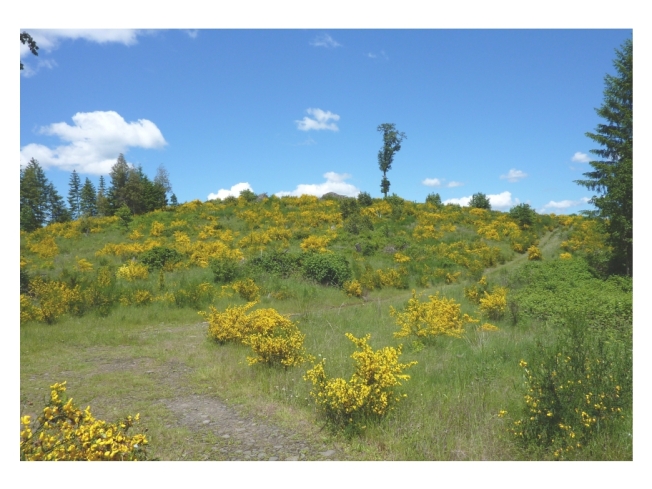 Until he chanced to glance under a rock:
Where there was hiding a horned toad
And I ran back to the road
Screaming that I’d seen a dinosaur

Gentle Readers,
This is a continuation in the saga of my youth, which turned me toward Sufism. Last time I was still describing the “orphanage” farm I was early relegated to. But as I hope you will see, it was a mighty interesting place, and experience.*

On this farm there was fruit growing everywhere but it was forbidden that any of the children should steal any. Foster children, that is. There were other children belonging to Mrs. Hunt’s family. I already mentioned Sandra Sue, the granddaughter, that I’d had a crush on. But, most notably, there was also younger and scrawny Donald Lee, another grand child. And of course Donald Lee had carte blanche to raid any tree, and eat the fruit in front of me to show what he could have and I could not.**

It was a small farm, but it was too big to police. So I always figured, let them prove it in court. Or even, let them find witnesses–so I became an expert fruit pirate! And the truth was, there was an incredible amount of fruit, and often in out of the way places, and daily available, was the cover of darkness. Actually, I think the rule was mostly designed to minimize thievery, forcing it underground.

There were upsides besides, to this abundance of fruit. And there was an exception to the child no eating fruit dictum, during harvest times. For instance finally we could roam marauding-free up and down the berry aisles, eating with impunity. Just so we returned regularly (albeit with massive purple stains around the lips) with our pots filled with ripe berries.

Another upside was Mrs Hunt set her female kitchen crew to prodigious canning exercises. There were stored row on row of mason jars full of pre-sugared fruit, ready to pour into a pie crust. It was mass production, and so every night we had desert, most memorably, berry pie.

Of course this surfeit of food didn’t stop me from getting a reputation, after dinner, for raiding the pigs’ slop bucket. What can I say? Pirates have no shame.

There was another upside to all that fruit. Perhaps you have heard the rumors that on a farm everyone eats well. Well, it at least was true out there, in Live Oak Acres. Every night there was roast beast, or (especially) fried rabbits. It was horrible to hear, but Mrs. Hunt regularly tied them up to a clothes line by their hind legs then sawed their heads off with a butcher knife. And once she put me in a pen with a flock of ironically-named ring neck doves, and told me I would be locked in there, until I’d wrung the neck of all the doves so she could freeze them (she had wall to wall freezers). I only remember my predicament. I don’t remember how it got resolved. I think it got repressed.

I don’t remember either (later story down the road) the moment when I began denying Jesus. Repressed again, I expect. But more on that later, if I stick with this mini-memoir. (I started out a fierce Jesus lover, but later fell under the fiercer influence of my atheist older brothers.)

Yes, we ate well. Though not so much as vegetarians. And not only because Mrs. Hunt raised her own meat, (pigs, the occasional Brahma steer, rabbits, chickens, Guinea fowl, pigeons and doves). But also she (who must be obeyed) had a Seventh Day Adventist brother (they are by rule vegetarians) who loved to hunt and because he couldn’t eat the deer himself, he donated his umpteen carcasses for his sister to freeze; and so we ate a lot of venison too.

(It was refreshing how her brother kept to the spirit of the Seventh Day thing . . .)

I guess I should mention the wild quail we ate a lot of. They would land en masse in a field back of the main orchard, and Mrs. Hunt’s son loved to take his shotgun to that shooting quail in a barrel exercise.***

This (small) “farm” was set like a jewel in a frame across the street from a creek with crawdads in it and beyond that, desert-like sandy land with yucca everywhere and in the far corner of Mrs. Hunt’s property was a big cluster perhaps thirty yards across of six foot tall Scotch Broom, which we named “The Green Weeds.” This was penetrated by trailing entry points like milk canals in oatmeal, and had a central clearing with fallen logs to sit on and pretend we were Indians. The photo seen above is of Scotch Broom, though of a stubblier, shorter variety.

Yes, physically, it was a child’s paradise. Natural beauty everywhere, rural roads, few cars, five hundred yards between the houses, and if you hiked toward Sled Hill for fifteen minutes you could indulge in daredevil entertainment. It was a pretty steep hill with matted straw in the summertime, which was slick to the runners of sleds which could be made to go I guess thirty miles an hour hurtling downhill. You could just take your pick of the best sleds always waiting at the bottom because why take them home? There was no fear of theft as they were only useful on this hill, and too heavy to cart around, anyway. They were all hand made out of old lumber and the rails were nailed with tin strips to make them slick.

And there was nearby a dammed-up creek swimming hole and in heart of the summer Daddy Bill would put the kids in the back of his pickup and take us all screaming to the swimming hole.

And once over Sled Hill, it was a two mile walk down a rural lane (there was an apricot tree growing wild on the side of the road. What fun!) to the two room country school house I went to for first through third grade. I had the same teacher for the second and third grades, because there were only two classrooms, and three grades in this school.

This teacher, Mrs. Hicks, knew who I was ward-wise, (of the court) and she would often invite me to hang with her at her house, helping in the garden. She was a mother away from home to me and even now, I am crying with gratitude just remembering her fresh-from-the-garden tomato and mayonnaise sandwiches. Of course I am easy, when it comes to tears.

God be with you,
Eric Halliwell
PS: Need I mention that I was terribly lonely?

* Interesting like the old Chinese curse, “May you live in interesting times.” Just kidding. Sort of. And also bearing in mind a favorite Hazrat Inayat Khan quote, “For every loss, there is a hidden gain, and for every gain, a hidden loss.” Implicit in the context of this was the fact that the gain doesn’t necessarily equal the loss, and vice versa. In fact, there often are vast discrepancies.

The corollary to which reinforced frequent Sufi wisdom, which says best not to get too excited when you get a “gain” nor too depressed when you receive a loss. Hard to tell how you came out. A very useful thing for keeping an even keel. (Sufis are big on that)

** This is not the worst I received at the hand of the spoiled brat Donald Lee. We often went without shoes, and Donald Lee, for instance would follow close behind with a shovel in hand, which he used to jab violently down just behind my bare heels. Kind of like in the westerns when they would shoot at your feet and tell you to dance. Of course I was a year or two older and bigger than Donald Lee, and so sorely tempted to just punch him out and have an end on it. But if and when I did, he would run to the formidable Mrs. Hunt who of course believed her beloved grandson over me whom she used to regularly accuse of stuff, saying “Evidently it was Eric. He’s the ring leader!”

And then I was banished from television at night, a punishment I wished was a whipping instead, especially when Disneyland was on.

But there was a dénouement to this. Three years after leaving, to supposedly live with my mother again (wait til you hear about that one!) I came back for a visit, and Donald Lee had every aspect of being ashamed and apologetic for his erst treatment of me. Also interesting . . .

***He was drafted into the army, sent to Germany, but soon got a dishonorable discharge for having attacked a black man with a razor, and justifying it because he was “only a nigger.”